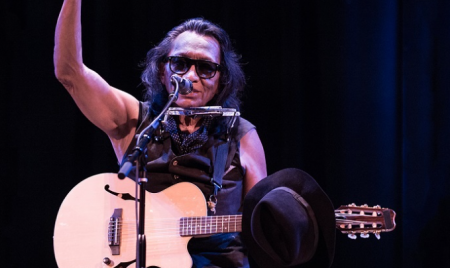 Today’s Groupon Winnipeg Daily Deal of the Day: Rodriguez: One G-Pass on August 13 at 8 p.m., starting from $50

How G-Pass Works: Following purchase, your G-Pass will be in My Groupons. You may redeem your G-Pass via the Groupon mobile app when you enter the venue. You may also print it out in advance. Use the G-Pass to enter the venue directly; you won’t need to redeem at will call. Discount reflects the merchant’s current ticket prices – price may differ on day of event.

Click here to buy now or for more info about the deal. Quantities are limited so don’t miss out!

The Fine Print
Promotional value expires Aug 13, 2017. Limit 8/person. All sales final, subject to Extraordinary Event Policy. Must purchase together to sit together. Merchant reserves right to sub closer seat. DIsability seating can’t be guaranteed; contact box office prior to purchase for availability. Holder assumes all risk in connection w/ the event & releases Groupon, Ticketmaster, venue & their affiliates from any related claims. Ticket value incl. all fees. Ticketmaster is issuer of tickets – discount reflects current ticket prices, which may change. Upon purchase, Groupon will provide your email to Ticketmaster to be used in accordance with Ticketmaster’s Privacy Policy. Merchant is solely responsible to purchasers for the care and quality of the advertised goods and services.

Who he is: a bluesy, folksy singer-songwriter known only by his last name and for two counterculture albums, Cold Fact and Coming to Reality in the late ’60s and early ’70s.
A career unnoticed: His music was not widely known in the United States, but received significant airplay in Australia and South Africa, where the political lyrics resonated with anti-Apartheid activists and gained him a quiet cult fandom.
An unanticipated resurgence: Unbeknownst to Rodriguez himself, fans in South Africa were still so enthralled with his music and message in the late ’90s that they tracked him down to his working-class Detroit neighborhood, a journey that was immortalized in the 2012 Academy Award–winning documentary Searching for Sugar Man.
A wider audience: Since the film’s release, Rodriguez has re-released his early albums and tours the world extensively, including in South Africa, Australia, and the United States.