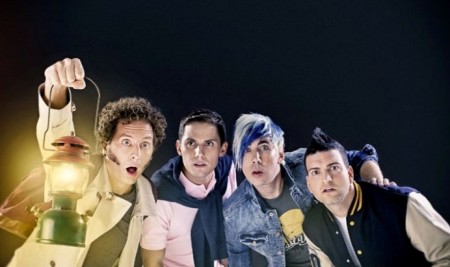 Today’s Groupon Winnipeg Daily Deal of the Day: Marianas Trench with Very Special Guests Walk Off The Earth: $43 for One G-Pass on Friday, March 25, at 7 p.m. (30% Off)

How G-Pass Works: Your G-Pass will be ready to print 48 hours after the deal ends. Print the G-Pass and use it to enter the venue directly; you won’t need to redeem at will call. Due to security restrictions, G-Passes cannot be redeemed through the Groupon mobile app. Discount reflects the merchant’s current ticket prices – price may differ on day of event.

In a Nutshell
Vancouver pop-rockers touring behind their ’80s-inspired latest, Astoria, join forces with the whimsical quintet of “Summer Vibe” fame

The Fine Print
Promotional value expires Mar 25, 2016. Limit 8/person. Refundable only on day of purchase. Must purchase together to sit together. Merchant reserves right to substitute closer seat. Disability seating cannot be guaranteed. Contact box office prior to purchase for availability. Holder assumes all risk in connection with the event and releases Groupon, Ticketmaster, venue and their affiliates from any related claims. Not redeemable on mobile app. Ticket value includes all fees. Discount reflects Live Nation’s current ticket prices, which may change. Merchant is solely responsible to purchasers for the care and quality of the advertised goods and services.

Marianas Trench
Location of Marianas Trench: the depths of Vancouver (when they’re not touring, that is)
Songs you might know: “All To Myself,” “Haven’t Had Enough,” “Stutter”
Song you didn’t know you know: “Call Me Maybe,” which Marianas Trench frontman Josh Ramsay co-wrote with former tour-mates Carly Rae Jepsen and Tavish Crowe
Song you should know: “One Love” from 2015’s Astoria, a song that Ramsay describes as “so lyrically candid I’m actually nervous; it’s like someone reading your diary.”
Speaking of Astoria: It’s a concept album of sorts inspired by coming-of-age ’80s movies (The Goonies in particular), New Wave giants Depeche Mode and The Eurythmics, and a tumultuous period in Ramsay’s life marked by illness, heartbreak, and feverish creativity.
A snapshot of the creative process: Ramsay and company in a Gastown apartment plastered in ’80s movie posters, dressed in leather pants and tank tops, pretending to be ’80s rockers while experimenting with vintage gear
How the the band describes the finished product: “Unapologetically cinematic, constantly surprising and featuring lush orchestral textures that segue seamlessly into spare, but powerful songs.”
Walk Off The Earth
When you first met them: in 2012 when their YouTube cover of Gotye’s “Somebody I Used to Know” went from viral to epidemic thanks to their innovative approach—five people playing one guitar
When Gotye met them: the same time you did, prompting him to call the band “hilarious and brilliant”
What happened next: they signed to a major label, a thrilling feat for a band that had been making eclectic indie music and clever videos of cover songs since 2006
How they racked up even more fans: with their debut EP, R.E.V.O, which features the infectious, reggae-tinged single “Summer Vibe”
Their latest: 2015’s Sing It All Away, which brims with whimsy, adventure, tightly knit harmonies, and instruments ranging from ukuleles and glockenspiels to kazoos and duct tape