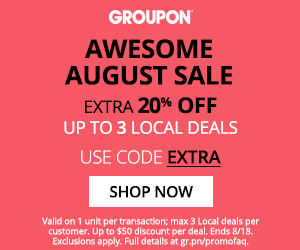 Last Chance Reminder: I originally posted about this deal yesterday. Here’s a reminder that the promo code expires tonight at midnight. This is a very popular deal so don’t miss out! A lot of people have taken advantage of this promo code.

Groupon.com is having an Awesome August Sale and is offering an incredible extra 20% off promo code today!

Save an extra 20% off any Local deal on Groupon when you enter the promotion code EXTRA at checkout! The great thing about this code is it’s valid on up to 3 local deals per customer (usually limit of 1 per person)! I’ve tested the code and can verify that it works. The code is valid on a single deal per transaction so you’ll need to purchase each deal individually.

The promo code works on any local deal in any city in Canada or U.S. (Ie. restaurants, spas, events & activities, heath & beauty, automotive, home, golf, etc…). Valid on 1 unit per transaction; max 3 Local deals per customer with a maximum $50 discount per deal.